Woodson got his Norman Christmas initiation last night. Jane came over for dinner and we had an early Christmas. I made Manicotti with garlic bread and ceasar salad. Everything turned out really well and because of an earlier trip to the dog park, all dogs were calm and mostly slept. We’re going again today! Woodson loves to run. Still working on his recall, though. When we leave I have to go get him because he doesn’t come to me.
I noticed last night how much nicer his coat is getting as I brush him more. It looks like at some point he probably had a chain around his neck. The fur is all broken all the way around.

We have a tradition of draping ribbons around the dog’s necks and taking pictures. Woodson was a good sport. 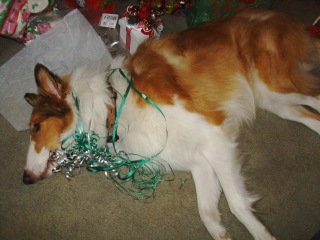 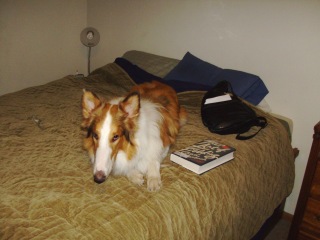 Busted! I came up into my bedroom to get ready for bed and Woodson was already there!
I guess we won’t be giving Woodson free roam of the house anytime soon.
I got home from Foss last night to find my human child at the table wrapping gifts. A cloth bag had been ripped to pieces and was all over the living room floor, plus a torn up cloth ornament, and a branch from the tree with one strand of lights laying on the floor.
“What’s going on here,” I asked.
“I don’t know, ” said my son, who had been home all evening. “I came down from upstairs and it was like this.”
Nice.
Not 100% it was Woodson, but Brett doesn’t usually tear stuff up when someone is home. He goes for garbage, but not destruction, so we’re assuming it was Woodson. KJ will have to keep a better eye on him or kennel him if he can’t.
With Desi gone, Woodson has transferred his energy to Brett who welcomes the play. Woodson knows how to fetch in the house. We’re going to try to get to the dog park as often as we can over Christmas break, to burn off all that energy!
Desi is now in Milwaukee, much closer to her future permanent home. I am so thankful to the woman and her family for taking her for two weeks. Even though I was really tired yesterday (after a busy weekend), we met in La Crosse for the transfer. It really was the best day for everybody. And I’m glad to be down to two dogs. We get Buddy in on Wednesday and I’m not sure how long he’s staying. Buddy is a Britany Spaniel and is very well behaved. He glues himself to KJ and even wants to be in KJ’s room when KJ is gone.
So, technically I am still fostering Woodson/Bruno, but it really feels like I will be adopting him. He’s pretty mellow. Other than when he jumps up on us. KJ encourages this, I don’t. Also when he was taught to sit and shake, he now sits and immediately throws his paw up to catch on whatever body part is closest. He’s getting better about being on the tie-out. I walk him mid-afternoon and before bed. But first thing in the morning all dogs only get tied in the yard. I can’t see that early in the morning!
I do need to make sure he was actually neutered.
Biological warning.
Dr. Ken said the same thing, but didn’t want to accuse another vet of not doing a job properly, but it sure feels like he still has both of his testicles. The swelling has gone down. Skyline talked to the clinic in Waseca and they explained how they neuter which can cause more swelling, so it seems that he was fully neutered, but neutering means removing the testicles, which produce the hormones. The point of neutering is to stop the ability of reproducing, but also to get rid of the hormones.
Took the doggies to the dog park and I had my camera in my jacket pocket. Do you think I remembered to take pictures?
No.

I did remember treats and man, Desi practically never left my side. At one point she was going to run off and all she heard was the baggie and she turned around and sat down in front of me.

Schatzie has been found. He actually came home in the middle of the night. Some people spotted him and followed him while calling Schatzie’s owner, who went outside. Schatzie came into the yard and laid down at the owner’s feet as if to say, okay, I’ve had enough of this life on the lam.
And, Desi is getting adopted!
I just talked to a woman in eastern Wisconsin who has a 16 year old daughter and is ready for another dog after putting her lab down a few months ago. Their situation is really what I had visioned for Desi, so much so that I know the Universe pulled everything together for this match. I love how that works!
She’s going to have a houseful over Christmas, so we’re going to wait until after the first of the year. Which will be good for all concerned.
A new picture of Desi, sacked out. 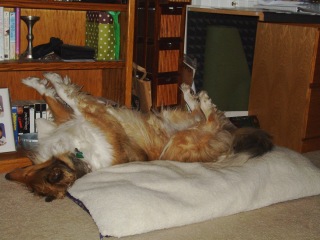 And, after a vote and much discussion, if we keep Bruno, which we probably will, he will be Woodson Clyde Norman. His personality reminds me so much of Jazz. The collie mix I had before KJ was born, who KJ grew up with.

It was so nice today, I took all three dogs out for a walk before the Packer game started. This was no easy task. I put Desi on her leash and hooked up Bruno and Brett on the double leash. Brett likes to pull and Bruno just isn’t that good on a leash yet. He’s fine, but he gets those long legs of his wrapped up. Eventually we got a good system down and all worked out. Went around the park.
I also brushed Bruno and Desi. Desi is much better about being brushed. Bruno was fine, just not happy about being up on the bench.
Bruno is really just a big lug. He’s smart and very loving. I get the feeling he’s been a house dog before. He jumps right up on the bed at free will. He hasn’t been much of a barker, so far.
KJ’s sleeping over at a friend’s so I have everybody in my room for the night. Brett always sleeps in with KJ unless he’s gone. Desi has been sleeping in there but has been bumped for Bruno. I’m debating on whether I will leave my door open or not. Brett always goes into the basement overnight to leave a gift. I don’t know why. He doesn’t have to. He is otherwise housebroken.
When Desi and Brett play, it’s noisy, with both dogs growling and barking. Today, Bruno and Desi started playing and it’s silent except for the breathing. They climb on top of each other, literally chew on each other, grabbing at legs, necks and noses, but not a peep.

I read Bruno’s vet records and his name is actually Bruno Mars. Someone must be a fan at the clinic.
Got some pictures of Bruno and Desi together. You can really see how tall he is. After I picked KJ up from school, I let Desi out of the kennel and took both Desi and Bruno for a walk together. This is a great way to let them get to know each other. Desi likes to circle on the leash, Bruno isn’t really used to a leash at all, but he did pretty good. Just a lot of tangled legs and wrapping around me.
Inside I let them loose and with all three dogs together everybody is getting along great and already trying to play. Desi is reacting so much better to Bruno than she did to the dog that lived at the home visit a week ago.
Whoever adopts Bruno is going to have to be careful about the top of his nose. It’s very pink under the white and it will get sunburned.
KJ already wants to keep him. I actually really like the idea of having just one dog and fostering the others. 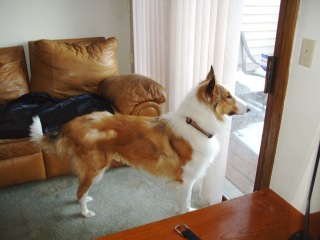 Terry picked him up in Waseca this morning and brought him to my house. Thanks, Terry! This was really nice of her.
He’s a tall boy. He’s wearing the cone of shame, still, from being neutered a week ago. Supposed to have him checked in another week. I’m going to have to put Desi in the kennel I picked up the other day and put Bruno in the bigger one, he’s that tall!
He’s really thin from being a stray, and also has had burs cut away, so his coat has patches, his tail fur has been completely chopped, but he’s gorgeous!
He’s laying down now, quietly resting. It’s been a busy morning for him. He’s had a tour of the house and we’re now in my bedroom with Desi kenneled downstairs and Brett in the hall. Just want to give him some quiet time for a bit. I don’t think he’s housebroken so need to keep him close.
Initially he seems like a really loving dog, easy going.
His coat is short, but really thick. He needs a good brushing. The vet figured him to be two to three years old.
I have the day off so can spend a lot of time with him.

And, as I post this, I hear him drinking out of the toilet. Yes, he’s fitting right in.