I took him down to Farmington today and they love him. He was so mellow, he just laid down on the rug and put his head in A’s lap and sighed. He would sit like that forever. I think dogs that come from his kind of situation appreciate the love more. Like anyone, actually, they don’t take it for granted.
Papers are filled out and signed, delivery tomorrow.
It is REALLY hard to take pictures of a shy dog. He won’t look at me, nor will he stay in one place. Hopefully KJ can get some better ones later with his iPad, too. There is such a delay with my cell phone that often all I get is a big blur. 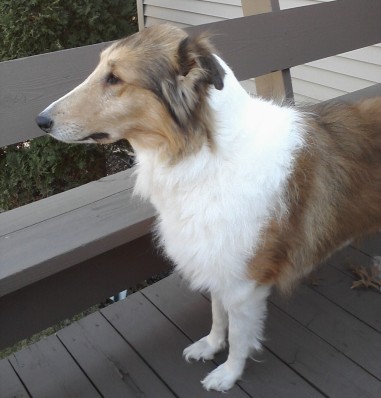 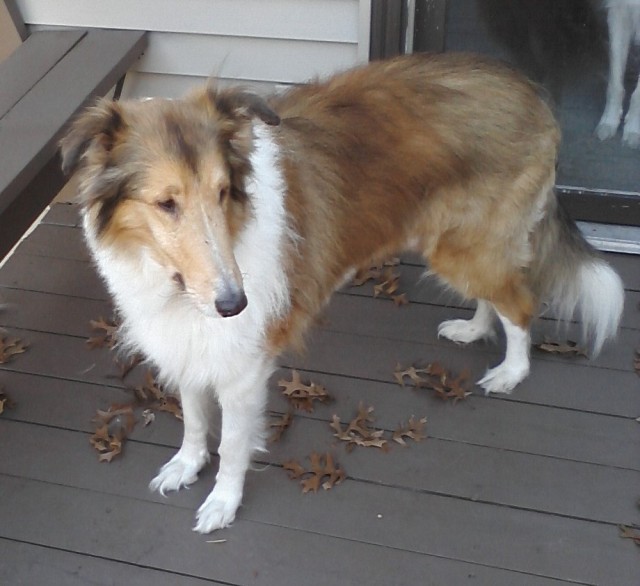 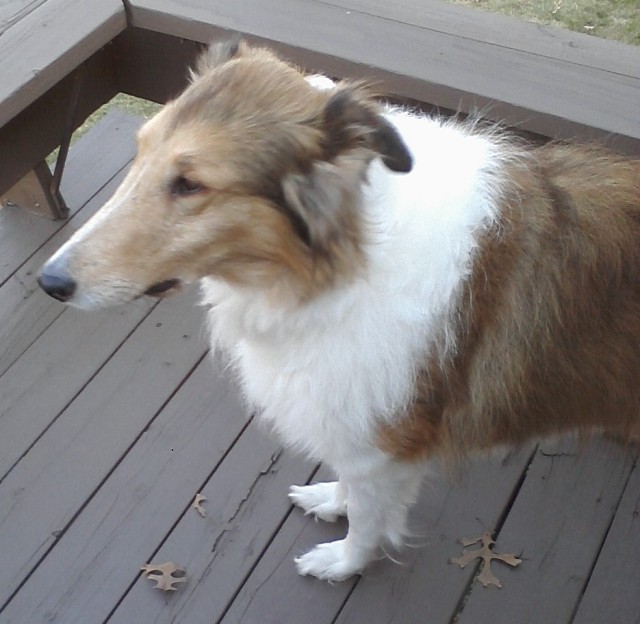 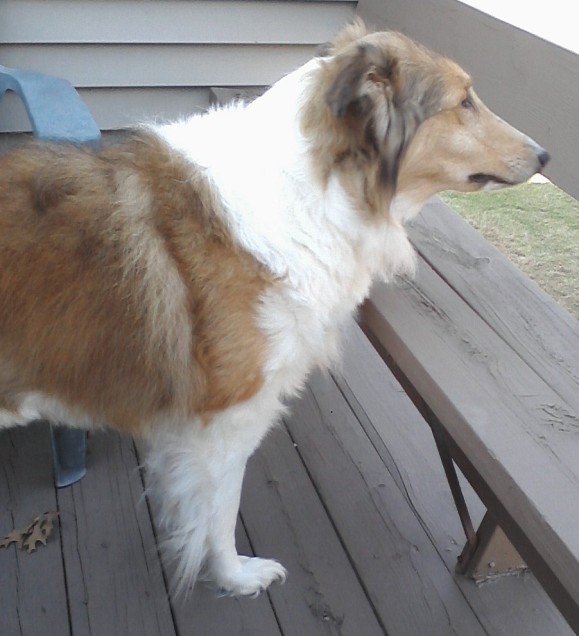 Rocky, I promise to brush you today and get new pictures to post on your bio so people can see what a beautiful dog you’re becoming. You still have more coat growing to do, but what’s growing in is thick and healthy.
___________________________________________________________
Yesterday was the Annual Dinner and Fundraiser for MWCR in Wayzata. It was well attended and it was great to see everybody. If I heard right, we took in $5,000 on Give To The Max Day, which is so cool. As Mary reported, we have taken in a lot of very needy collies these past six months. From heartworm positive, to dogs needing major surgeries, it’s been pretty expensive. It always amazes me how people step up to donate or find ways to raise the money. I got to put some faces to some new people I’d talked to on the phone, too, over the last year.
The silent auction did well, too. Lots of great stuff with brisk bidding. We got to test out the new iPad with the new card reader, that was donated by a member, so now we can take credit cards at events. Pretty slick. You sign your name with your finger and it will send your receipt in a text message or to your email. This will be really nice to have at events, because we’ve had a lot of people ask if we take plastic, then don’t buy anything because we didn’t.
The guest speaker was Ilga Cimbulis (see the link to her website on the right side of this blog). She spoke a bit on how she taps into the communication, and then actually started communicating with Mary’s foster, Liam, who wasn’t there, but she can do this across space. Liam has turned into quite the project. Ilga said he has very low self esteem, and gave Mary all kinds of tips on how to work with him and deal with his anxiety.
A special thank you to, Jan Van Sloun, who worked with a company to donate bottles of waterless shampoo, odor eliminating spray and another all natural shampoo, and put them into gift bags for everybody. Much appreciated and I already used the spray this morning after Rocky pooped in the house! I was just thinking last night about how I could say he was 100% housebroken. Yet,  this morning was probably my fault because I didn’t leave him outside long enough. He wants to come back in right away because I feed him then, but if I leave him out longer he takes care of that business. I hope his adopter is an early riser, because he’s ready to get up before I am, even when I have to get up earlier than I want to, which is everyday, actually.
One last thing that I’m still a little blown away about, from last night. Terry, Linda, KJ and I were doing the last of the packing up, when I noticed a bag on a table. Turned out it was someone’s purse, wallet, phone and all. She was one of the winners of who travelled the farthest to the dinner, too!. We’re sitting at the table trying to figure out what to do. Thinking man, she’s already been gone at least an hour, and what happens if she realizes she has to stop for gas before she realizes she doesn’t have her purse. As we planned out what to do, the phone at the American Legion front desk rang and Terry got up to answer it. Weird, too, because earlier it rang and someone from the AL answered it in the bar. Terry says hello and it was the purse owner! Luckily she was staying overnight in Roseville instead of driving all the way back up north. So so weird. Roseville is closer to my house than Terry or Linda’s so off we went. We met her at the Barnes and Noble in HarMar Mall (old stomping grounds for me as that and Rosedale were where we always went shopping growing up in New Richmond).
I’m going to use this waterless shampoo on Rocky and get to my promise.
The new newsletter is published!
Always full of great information.
This month featuring the #1 pet health problem, the annual dinner coming up on the 17th, updates on some of our dogs, Toon orders and a new line of wine, plus lots more.
MWCR November newsletter