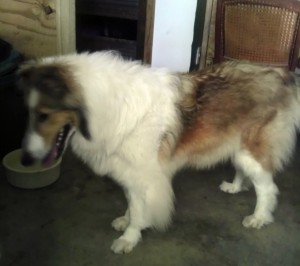 That’s her name. The pictures are just some early quick shots, as she wouldn’t hold still for long. She was born in April, 2013, so she’s just over a year old. Her owner got her as a puppy and was starting to house-train her, etc., but had to have heart surgery and then her husband was in the motorcycle accident, so Lassie has been an outdoor dog since last fall. I had to carry her into my car. I didn’t bring a crate, and should have. I had to pull over on 94. She was trying to get into the front seat and I couldn’t push her back. I attached her leash to a hook on the rear wall of the Jeep and she then couldn’t reach me.

She is definitely a flight risk. I will be the only one handling her until she gets used to the leash. She’s been in a fenced yard her whole life. I had to drag her out of the car, then carry her into the house. She even put a paw out and caught the door as I came in. I did take her out into the park for about 20 minutes. She didn’t do anything, but buck and pull and jump. At one point she did a leap into the air and flipped over. She was fine, but that is how bad she is. Let’s hope she learns quickly.

So, I have her in the basement with a crate she can go in if she wants to. I’m just going to let her calm down some. Then will take her out again later. I have some waterless bath spray I will work into her coat and try to brush her out a bit. She’s stinky and matted. She’s really pretty, though. White-factored. Her mom was white and father tri. 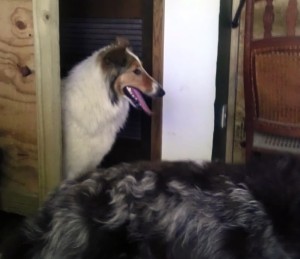 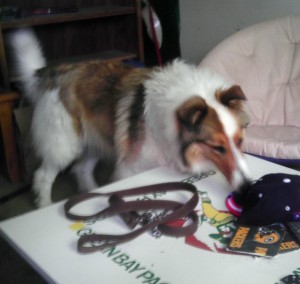 She has met Brett and showed some dominant signs, arching her head up over his back. Brett just ignored her.

Cody’s hand-off went well. All the paperwork was done online, so all I basically did was hand him over. I know he wanted to get going as he had a long drive back. It was pouring most of the way east and now that I’m home, the sun is out and it’s going to be a really nice evening.